Apple or Android? Two of our experts debate the biggest rivalry in mobile phones

Android and Apple have both been huge successes in the mobile phone market, but they have very different strengths. Two of our experts discuss the details and explain their personal preference.

Marvel or DC? Milk or tea bag first? Hawaiian pizza: delicious or disgusting? Debates like these can sharply divide opinions, but perhaps none is as tribal as Apple v Android phones. Because Silver Cloud is independent and can choose from the whole market, we don’t have to pick a side. And, in fact, there is no clear winner, as each operating system has different pros and cons.

We brought together two of our experts to explore the issue further: Paul Sanderson (in his own time, a loyal iPhone user) and Jonathan Betts (an Android devotee).

Paul Sanderson: The first Apple phone that I got was an iPhone 4. It was a hand-me-down: it was my parents’ old phone. I loved how it was a combination of a phone, MP3 player, camera, and it had the App store with all these apps that work as soon as you press the button, which is not always the case with Android.

The iPhone is much more practical. It does what it says on the tin.

Jonathan Betts: Fair enough. Originally I was a big Apple user, a long time ago. It just got to a point where the phones got really expensive for what they were doing. In my eyes, a phone is there to phone people. (Obviously also for photos and day-to-day stuff like emails as well.) But for me, I found that moving to an Android device was more practical and cost-effective. I also found it to be a lot more user-friendly than Apple. So I have been an Android user now for about three years, and I just can’t see myself going back. Also because of the huge variety of handsets you can get with Android. So you can spend £1,000 if you want to, but you can also get a mid-market phone, which also does exactly what you need it to do.

Paul: Outside of our personal preference, when we’re designing a solution for a customer, cost is obviously a key factor. Whether the solution involves mobiles or not.

Jonathan: Absolutely. You look at costs, how many users there are, what they’re going to use the phones for. Are you going to use them mainly for emails? Is it mainly going to be calls, is it going to be text messages only? Are they going to use any data? It just depends on each user in each case. It’s also always worth asking if they have any preferences about handsets.

Paul: Nine times out of ten, a director will want a nice expensive phone! Typically the Apple product is seen as the high-end option, and part of that is down to the brand, isn’t it.

Jonathan: The customer’s personal preference is certainly a factor when you’re designing a solution.

Paul: When you’re buying 5, 10, 15, 20 handsets you’re usually looking at a low-end market entry phone, typically you’re talking about a Samsung A32 now, which replaced the A20 and A10. If the customer is using it intensively for apps then they would need something with a bit more power behind it, which will require a bit more money. But typically the larger solutions use the cheaper handsets. That’s the biggest driver.

Jonathan: The great strength of Android is that it uses open source software: anyone can see the code, and anyone can design an app that works with it. (Or you can wipe the Android operating system and put your own version on there. That’s what most developers do.)

So if you look at Apple App Store, there’s probably a million individual apps there, but there’s twice as many available on Android and manufacturer stores: Google Play, Samsung Galaxy Store, Amazon App Store….

Paul: True. Although that’s partly because the app review process (prior to publishing) is less stringent on Google Play and other Android stores.

When you go with Apple, you’re locked into whatever apps are available on the Apple App store. But that’s good! It’s totally verified, totally secure, and nothing can get in there via the back door. The iPhone is super secure because of that. (Well, in theory you can jailbreak your phone, but just don’t!).

On the other hand, with Android, anyone can add an app to any store. And if you download and install it, then you’ve given someone access to everything. So I think one of the big issues is security. Open source software allows many potential avenues for a breach, unlike when these things are all locked down.

Jonathan: If you do have a security issue, you can go to the operating system, you can remove files, you can delete more or less anything you want. You need to know what you’re doing, but it’s possible. You can deal with it and you won’t be restricted by the system. Whereas with Apple, after a security breach, you’re waiting on their response to that. There’s nothing you can do other than accept it, turn your phone off, and hopefully it works later on.

Paul: Sure, but Apple’s developers would be on the case pretty quick.

And day-to-day, Apple is more user-friendly: you’ve got Siri, Apple’s virtual assistant, and facial recognition, both of which have developed considerably in recent years. I’m sure most people that are not very confident with tech would say that Apple phones are a lot easier to navigate. Whereas on Android, I personally think that you can have different settings that are a lot harder to find.

Jonathan: Android is also user-friendly out of the box! And it’s just dependent on preference again, isn’t it? Anything can seem rigid when you first start with it. After a while you get used to different operating systems. If I went back to Apple I would most probably find it hard for a few weeks, but after that I’d get my head around it.

And there’s a lot of customisation within the Android environment. Android allows for much more multi-tasking that makes it easy to do two things at once. Apple can now do that a bit as well. But in Android you can really drill in and totally customise it. You can really make it so slick: you know where everything is and you can shorten the time it takes to do things.

Paul: But with the iPhone, anybody can pick it up and get to where they need to be because it’s so familiar. (If you’re used to the environment in the first place, of course.) And Apple products are always just so beautifully designed.

Going back to changing operating systems and things like that. I had a customer that used 21 phones – Android – and the operating system that came with them didn’t do WiFi calling. So I updated the software on all 21 phones, and now the customer can use WiFi calling. All done in one day. Whereas if we were waiting on Apple to do that, it could be months.

Paul: I have to say that file transfer – even though Apple has AirDrop, which is great for Apple to Apple transfer – is easy on Android too. Basically you connect your phone to your laptop via USB, and drag and drop the file. These days, most things are on the cloud, so file transfer is less important. You’re using SharePoint, you’re using Google Drive, you’re saving your images to the cloud too. But I’d definitely recommend Android for anyone who is moving files about a lot.

Jonathan: It’s also easier to migrate data from one phone to another on Android. You basically do it by putting two phones next to each other.

Paul: Fair enough. Android is certainly the right choice in many situations. Personally, I think the great strength of Apple is that it’s much more secure. It’s more stable as well. And if there’s an app on Apple, it’s most likely going to work. Because imagine you’re developing an app: you develop an app for the iOS environment, and you’ll know it will work on all current iPhones. But with Android, you create an app that works on the Pixel, it might not be so smooth on the Huawei.

Jonathan: With Android, you get cost-effectiveness and flexibility. Great if you need a large number of mobiles, and maybe people don’t need to do a huge number of fancy things, but just need to do the basics effectively. And also the fact that it’s more customisable to create the experience that you personally want.

It all depends on what the customer needs.

Paul: Yes, absolutely. In the end – with a mobiles solution, or IT, or anything else – it all comes down to properly understanding the customer’s organisation, how it works, what they’re trying to do, how they use technology. And then you can work out what’s right for them.

Jonathan: Of course, people don’t even have to choose only Android or only Apple. If you want to move data from Apple to Android or Android to Apple, it’s not quite as easy but these days there are apps you can use which make it easier. You just download the app, put in what you want to move across, and it does it for you.

And both systems interlink with each other, whatever you’re doing.

Paul: Yes, true. People don’t always all want the same thing, but we can all still communicate.

And so in the end Paul and Jonathan, although they differed on quite a lot, agreed on the most important point. Communication is the key, whether Apple or Android is the best choice for you. Has this blog moved you from one camp to the other, or even just part of the way? Or are you completely set in your ways and unpersuadable? Get in touch on social media and let us know. 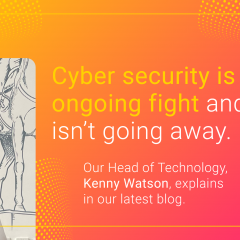 Cyber security: a big issue that’s going to get bigger

Cyber security is an ever-present factor in our online lives. And, at least in the short term, keeping your data ... 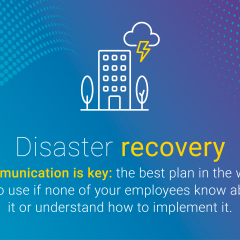 Disaster Recovery: hope for the best, but plan for the worst

Most of us try not to spend much time thinking about huge events that could seriously damage our businesses. The ... 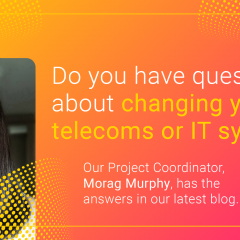 Changing your telecoms or IT – Q&A with Morag Murphy

We asked Morag Murphy, Project Coordinator, about changing your telecoms or IT system. Morag manages the process of setting up ... 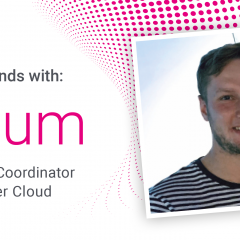 60 seconds with Calum Campbell, Logistics Coordinator.   What attracted you to Silver Cloud? The role itself excited me: it is ... 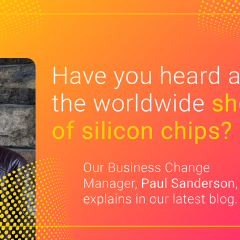 The worldwide shortage of silicon chips: your questions answered

Maybe you’ve heard about the worldwide shortage of silicon chips, and are wondering how it started, when it might ... 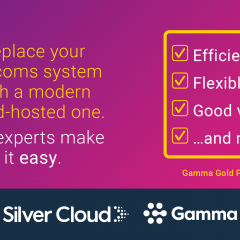 Upgrading your phone system doesn’t have to be difficult

There’s no doubt about the benefits of replacing an outdated phone system with a modern cloud-based one that offers ... 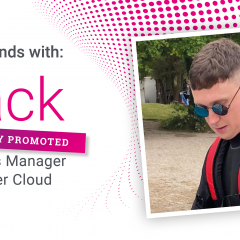 60 seconds with Jack Hunter, Business Manager   How long have you been with Silver Cloud? Four glorious years and counting! &... 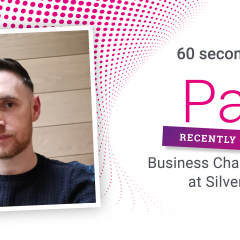 60 seconds with Paul Sanderson, Business Change Manager How long have you been with Silver Cloud? It’s my two-year anniversary ...

60 seconds with Kevin Rowe, Client Sales Manager   What attracted you to Silver Cloud? Having been in the Telco sector ... 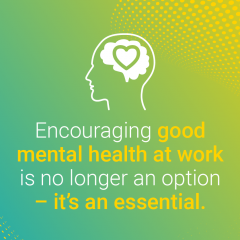 How to create a working environment that encourages good mental health

Forty years ago, if you said that employers should ensure that their workplaces helped people to maintain good mental health, ...